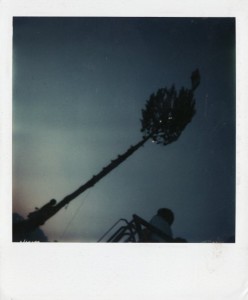 I am sure most of the people that visit my blog are familiar with the Festival of San Giorgio that is held on the second weekend of August each year. It is a fantastic, wonderful, and joyous occasion. I have been fortunate to celebrate this event four times in my life. I wanted to pass along some information about the history of this celebration. It is said that a very difficult event occurred in Martone in 1860 when it risked being destroyed by order of General La Marmora. Apparently some boys from Gioiosa were in Martone to kidnap some girls. The Martonesi decided to defend themselves with arms because the Gioiosani committed many acts of violence. The head of the Gioiosani, originally from Sicily, joined the army of General La Marmora and managed to convince him to bomb the country. This order was dated August 29 and it seemed that there was no more hope for Martone. Then the Martonesi witnessed an extraordinary event: the order was withdrawn. It was on August 30, 1860. The people of Martone thought this was a miracle from San Giorgio and have celebrated every August.
One of the main events of this celebration is a unique tradition has been repeated for centuries in Martone. According to the custom called “l’arzata da ‘ntinna”, a beech tree of about 25-30 meters is hung with typical Calabrian products. The tree is selected and cut in the mountains and then it is driven by two pairs of oxen to the main square of the Martone. Here it is grafted with the top of a smaller tree. Then it is decorated with lights and some of the typical food products of Martone, like traditional sguite and tasty local cheeses. When it is all set, ‘ntinna is hoisted with thick ropes from the roofs of the Church and surrounding building using only human power. The excitement begins once the tree is raised and secured. Then people from all over Italy compete in climbing the tree. It is a tradition that attracts many people, in conjunction with the celebrations dedicated to San Giorgio.

I recently received a post from Wally who lives in Hillsville, Pennsylvania. He told me that many people from Martone and the surrounding comunes moved there. I had never heard of this cluster of immigrants and it made me wonder what other places the Martonese emigrated to. My hometown of Meriden, Connecticut is another large cluster in the United States. Toronto, Ontario in Canada. Sydney, Australia. Turin (Torino), Italy. These are the places that I know about. I would love to hear more about these places and the other places I am unaware of. I would not doubt that there is at least one place in South America. This discussion could help us find some long lost relatives and get more answers about our family history. I look forward to hearing from everyone!!

The holidays are a great time of year to work on your family tree! If you are interested in finding out about your family then talk to your older relatives. They have a wealth of information to share if you just sit down and talk to them. While the info they share may or may not be 100% accurate, it can provide some clues and get you started with your research. They may also have old records and photos to share that will validate your work. Have fun and let me know if I can help. Buon Natale, Merry Christmas, and Happy New Year!!

Hi, my name is Carmen Papallo and my family originated in Martone, RC, Italy.  I am starting this genealogy blog to try and bring all the families of Martone together.  I have been gathering all the civil records available on microfilm at the local Mormon Family History Library for the last 4 years.  These records cover the period from 1809 – 1910.  I have worked with several cousins and friends who have been researching their families from Martone and nearby communes.  Martonese are now scattered all over the world and I look forward to working with anyone interested in their family history.  Researching together will help us to preserve the history of this wonderful comune!  More to come soon!